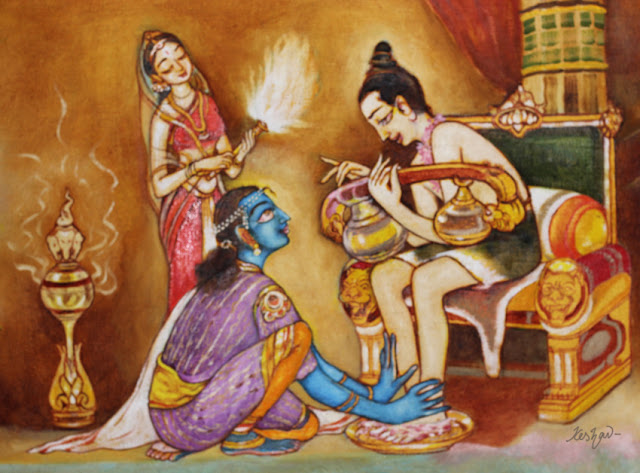 Having heard that Naraka was killed and Krishna has married numerous girls, Narada was eager to see how Krishna managed to live with all of them. He visits Krishna in the opulent and well-planned city Dwaraka, built by the celestial architect, Vishwakarma. Narada arrives at a row of palaces of Krishna's consorts. At random, he enters one of the palaces.
Narada saw the Lord of the Yadus seated together with Rukmini, who was fanning her Lord with a chowrie. She did not allot that task to one of her many maid servants. Krishna rose immediately from his seat and bows his head to the Devarshi and welcomed him with joined palms. He seats his devotee Narada on his own seat and washes the feet of the sage and sprinkles that water on his own self.  After paying due respects, Krishna asks the divine sage humbly, in a sweet and divine voice, "Tell me my Lord!  what service I may render to you?"
Narada spoke to Krishna: "It is no wonder you love your devotees and chastise the wicked, O Lord! You have descended on earth for the supreme welfare of us all. Bless me that I may go about contemplating on your feet at all times." He takes leave of Krishna.
Narada, in order to ascertain the divine power of Yogamaya, enters another mansion of a consort of Krishna. He saw Krishna playing dice with his consort, and also Uddhava, his friend. Krishna receives him with great devotion. As though unaware of his arrival, Krishna asks Narada: "O Devarshi! when did you come? What service can we render to you, O most wise one?" Narada was astonished. Silently rising from his seat, he moved to another mansion. There he saw Krishna fondling his infant sons. In another mansion, Narada finds Krishna preparing for his bath. In yet another, he was engaged in pouring oblations into the sacrificial fire. In some he was riding horses and chariots. In one mansion Krishna was practising fencing with his sword with his elder brother Balarama. If he was found feeding people in one mansion, he was found gifting cows to wise men in another. While he made merry with his consort and friends in one, he would adhere strictly to Dharma in another. Narada saw Krishna devising ways to accumulate wealth in one home; in another he was in a strategy session, in preparation for war or in another, devising a plan to ensure peace. Narada observed Krishna -- planning for a wedding ceremony of his sons and daughters, or busy organising the building of temples, wells and gardens for the welfare of the public. Thus Narada finds Krishna engaged in different activities all at once, in all different mansions. He laughing spoke to Krishna: "O Yogacharya! your powers of yoga has been revealed to our mind, only through our devotion to you. Even the gods like Brahma, with their enormous power of perception find it extremely difficult to witness, in such a simple way, the power of your Yogamaya. Give me leave, O Lord! that I may sing your glories moving about through all the worlds."
Krishna replied, "O sage! I am not only the teacher of Dharma, but practise it myself, to lend approval to those who practise it. I follow Dharma in order to teach the world by example. Therefore do not get perplexed by this Yogamaya, my son."  Contemplating on Krishna's deeds as a pious householder, the curious Devarshi leaves, feeling astonished and much delighted.
at December 24, 2012 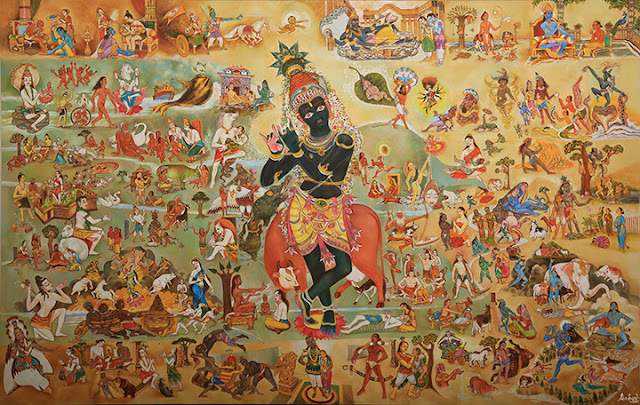